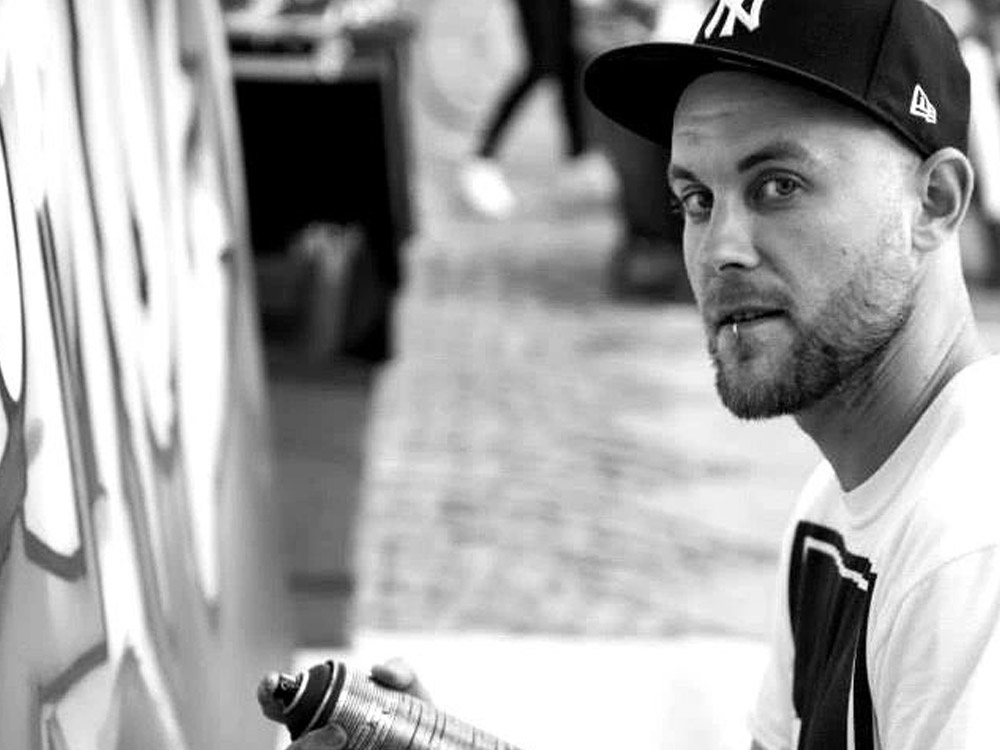 Kristian Douglas AKA Captain Kris, Graffiti Artist and Book Illustrator (eg Nick Cannon’s children’s book) talks about his career roll out, why you shouldn’t put all your eggs in one basket, and how to successfully apply the F*ck it theory on nine-to-five.

Me: You went to art school with many people who didn’t make it in the end… what do you think made a difference between you and them?
Captain: I don’t know…I’m really good?

Me: (Snorting)
Captain: Tutors told me often in school that I needed to push it and improve. I didn’t really care by then. All I wanted to do was to paint graffiti. Then the realisation came: this is all I want to do, and I want to do it all the time.

Me: What about the moment when you jumped off the agency and started to be on your own?
Captain: Well…I worked for no money for a month or two. I had the offer to either quit my job or basically get the sack…in a nice way, of course! I was trying to put my portfolio together. It took probably good six months to actually make any good money off it to get properly by, and not just losing money spending it to live. So now, two years down the line, I’m earning more that I ever made before for doing what I love. Which is awesome. And I guess that’s just a process of working hard all the time. No days off!

Me: Was there a moment when you had to eat from the bins and you wanted to quit?
Captain: never. There were times I ate maybe a bit too often baked beans and potatoes because I had almost no money, err… very little money, although I was never mega poor or anything, I had to scrape by a little.

Me: What’s your tip to all folks who work nine to five and day-dream of their plan A?
Captain: I would say: it is important to have something to fall back on, some kind of a trade or profession. For me, it was working in the packaging and branding industry, which is something I still do a little bit. It is important you don’t go and put all your eggs in just one basket. It’s really tough. There’s so much competition. And it’s really hard to make any kind of name for you in a market that is really saturated by people all trying to do sort of the same stuff. And I also say: it pays off to be sociable, and to be nice to people… My advice is: just be nice and smash it really hard!

Me: How is the art scene in LA compared to London?
Captain: It all comes down to the work you do. You have to be really good at that because there is so much of it out there. There is so much sh*t, and really good stuff as well. London is quite good for people who do graffiti; Shoreditch is a great place, where people see your work. I don’t really know how do people like me get work in LA yet.

Me: What’s your favourite city?
Captain: LA! The people were really nice. When I was in NY, people were quite mean, they were quite rude, and if there is one thing I’ve noticed that was different between London and LA, whether it’s an elevator, or any place, people in LA would go (doing American accent): “Hey, how is it goin’? How are ya?” while in London people would look at the floor, or look at the mobile phone, or stare at the wall to avoid any kind of conversation. I’m from New Zealand and it’s a more social place than here. So the people make the difference. And if I were about to say which was my favourite country, I would say New Zealand. Coz people there are nice, and it’s cool. And I’m from there.

Me: How long have you been in London?
Captain: In England for 17 years, and in London about 7-8 years.

Me: Do you see yourself settling down here?
Captain: I would probably have my base here, but maybe not forever. I am going to try to travel a lot for work and spend as much time as I can at other spaces.

Me: What do you love and hate about London?
Captain: A lot of my friends are here, and there is a lot of opportunity for work here, especially for people who do what I do – a big network continuing to grow. I like the city. You go through a phase when you’re sometimes hating it, like when it’s raining and miserable and everyone going to work thinks it’s fucking shit. What do you love about London?

Me: It’s really addictive. People come here to change their life or build it up. And there are always new places to go, although we often end up going to the same places. What’s your favourite place to go?
Captain: A bar?

Me: Anything.
Captain: One of the places I really enjoyed going to, and which I think maybe no longer exists actually, a rooftop in Shoreditch. You always met people who you were familiar with. Now they’ve got a new venue in Whitechapel.

Me: What would you like to be better at?
Captain: I have no weaknesses. None. Haha. I’m perfect in every way.

Me: (Laughing)
Captain: Okay, I’ve got no hair. I kind of wished that I had more hair. That’s my biggest weakness. I’m not that physically fit at the moment. I’ve just come from America. …yeah, the physical appearance!

Me: Your superpower?
Captain: I’m obsessed with bold graphic lines and I’m trying to make them solid and crisp. I’ve been probably nice to people and I managed to build up a network of friends and artists and connections around me, who helped me to develop. Now we paint together all the time with the guys from the crew. It helps to have these people around, who you’re trying to be on the same level with. Then you do it more, they help you to push it further. They will be asking you to go to places and you will go because that’s what you wanna do.